Home Cars Top 4 Benefits of Listening to Radio While Driving 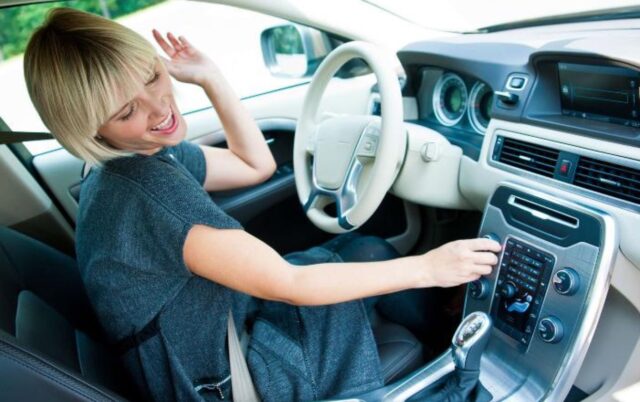 If you type the question ‘is it okay to listen to the radio while driving’ anywhere on Google or the Internet, the truth is that you’ll come across a bunch of conflicting opinions. You’ll bump into research papers, newspaper articles, or even forum discussions where there’ll be an equal number of those who are explicitly against it and those who are in favor of the opposite. Everyone has their own view of this phenomenon and also their own point that they want to prove and make clear. It’s somewhat logical why for certain individuals this poses more danger than enjoyment since it’s mainly linked to the fear of distraction while driving and the risk of a potential accident. However, can we look at things only from this angle?

The answer is no – it’s advisable to look at the other side too, that indicates the cool sides and benefits that we can get from this little ritual.

Ready to hear more about it? Here it goes.

1. You always get to bump into some oldies, but also fresh tunes

Anyone who drives regularly and is a fan of chilling while listening to their favorite radio stations from the early morning can confirm this first point. There’s no sweeter or more nostalgic feeling than when we hear a song on the radio that we haven’t heard in centuries. At one point, the latest hit is heard from your speakers, but in the next, there comes the song that takes you back to the period of high school, your first boyfriend/girlfriend and crazy parties. Moments like these have an extremely positive effect on your mood, which can give you incomparably more energy for the rest of the day.

In addition, when you normally listen to various stations with diverse kinds of music, it’s inevitable to be up to date with completely new songs and hits that are just starting to be released on TV or YouTube. Just when you think that your old playlist is starting to bore you to death, there are always some fresh notes that’ll brighten your morning and add a new catchy melody to your list of fave songs.

2. You get informed about things and educate yourself

Radio isn’t just music. Okay, that’s what we come across most often and what we love the most – but we sometimes forget that many other phenomenal things can be found within it. There are bunches of lovely educational shows, motivational interviews with famous people, cheerful presenters who keep overwhelming us with cool trivia facts… At some stations, you can even ‘catch’ a whole new world of audio dramas, which are a perfect substitute for theater if you don’t have time to go. A real cultural and intellectual boost, right?

When we’re in the phase of learning a foreign language, it’s always advisable to listen to stories and dialogues in that language, so stations in Spanish or German, for example, can improve our knowledge and listening skills even while we’re rushing to work. Of course, we mustn’t omit the daily news that can be heard almost every hour, so you’re always up to date with current events and well-informed, without reading the newspaper or watching television.

3. The stress and anxiety get replaced by fun

We aren’t equally relaxed and carefree every time we get behind the wheel. We tend to think through numerous obligations we have on our way to work or while driving on the highway. About the house, we didn’t clean on time, about the children who need to be picked up from kindergarten, about that horrible quarrel with the boss the other day… Stress and tension just pile up on our shoulders in a thousand negative ways and, among other things, it reflects on our physical health.

Some studies show that the positive effect of hearing things from the radio while driving is most depicted in this segment. Great music or interesting and witty radio shows lift spirits and help us relax and at least forget about problems for a while or smile more frequently. Sometimes you just need to stop for at least a second, relax all the muscles in your body and take a deep breath while your fave’s playing on your speakers.

The best thing about this is that you can use this technique even when you’re out of your four-wheeled friend, for example, while studying or doing any other potentially stressful activities. How does Chillout Radio sound to you? Yes – a thing like this exists as well, a whole little musical universe with bunches of cool songs on the live radio. Even some fun facts and interviews, too – in case you wanna keep using it at home or at work when you’ll be able to read as well.

4. You don’t need to use your phone while driving

When we listen to playlists from YouTube, for example, while sliding down the road, it’s inevitable to glance at your cell phone from time to time. At times because of the irritating commercials that pop up after each song, at times in order to change the current or upcoming tune.

And sometimes it happens that you really want to type a completely different song into the search and find it, although it requires moving your focus to the screen rather than watching the road. This automatically entails a certain amount of danger – you don’t want to cause an accident that brings terrible consequences just because of a moment of carelessness.

On the contrary, once you select a station you like, you won’t have to look at any display. Eventually, you’ll possibly just click on the button in front of you in case you want to change the channel. You won’t have to switch to another song manually since they’ll play automatically and you can’t influence their order. A much safer option – you’ll agree.

How does it look to you now? Or, better said, does it look safe enough for you to believe it? Yes – there’ll always be certain reasons against playing music or radio shows while being in a car, and that’s something that won’t change. However, we’ve just proven that there’s always the other side of the coin. Why not try to look on the bright side? You might thank yourselves later!

How to Protect Yourself From Phishing Emails

What Are the Hidden Costs of Software Development Outsourcing?

8 Questions You Should Ask Before Shipping Your Car